This week I’m on the Metcalf Institute’s annual workshop for journalists; it’s based at the University of Rhode Island’s graduate school of oceanography, and it gets journalists out into the field to better understand how science and scientists work. Today (Monday) is the second day and the first full day; we started off with a dinner discussion last night that I had some serious trouble staying awake for (thanks jetlag!).

It has been COLD here – probably about 12 to 18 deg C during the day. (So much for summer.) In fact, it’s been so rainy that the organisers called off our salt marsh trip – we would have been measuring the health of a salt marsh, taking core samples, doing mist netting… when inclement weather keeps scientists out of the field, you KNOW it’s bad.

Anyway, some quick takes from what we’ve done so far. 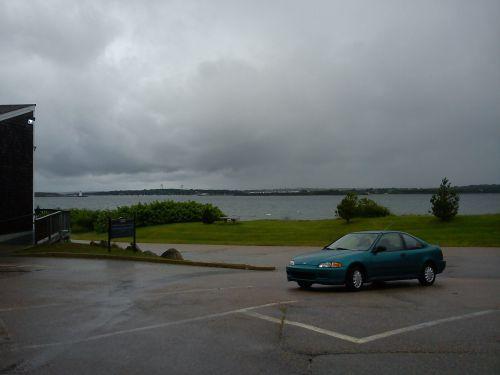 and a small shark tank with a couple of small sharks (smoothhounds); I think they have these to impress visiting school kids. At the merest whiff of food the sharks spy-hop (this is spy-hopping) to see what’s up. Totally learned behaviour – they don’t do it much in the wild. I was duly impressed.

(Oh, wait, dagnabit! I can’t show you the video of the sharks until I convert the file format and THEN upload it! Phone, why you make it so hard for us?)

Here’s Seawater Facilities manager Ed Baker with an innocuous-looking bit of plastic. It’s pure polyethene… so it mops up hydrophobic pollutants (often emerging contaminants like bisphenol A or other volatile organic compounds) so that researchers can figure out what’s in the water.

We can’t be certain, but here’s a possible explanation.

Ed explained how a perfect storm of factors can lead to hypoxia or a shortage of oxygen in the aquatic environment. Oxygen is 21 per cent of the atmosphere, but only 0.5 per cent of the ocean.

1. When it is hot, living things in the water have higher metabolic rates and respire more, thus using up more oxygen;
2. After a heavy rain, a dense lens of fresh water sits on top of the seawater and doesn’t allow much oxygen to get into the seawater.
3. And in calm seas, there’s little or no wave mixing action, which reduces the diffusion of oxygen through the water column.
At night, when plants and algae in the water stop photosynthesising, around 4 am, all the oxygen gets used up, and boom…fish kill.
Unfortunately there’s no way to tell after the fact that this is what happened – instead, people need to be out there measuring it an hour after hour (and they actually did in the US). We know how it works, but we can’t say whether it caused a specific, past fish kill like the Pasir Ris incident.
And now, it’s almost midnight and *I* am going to pass out – we’ll actually be studying hypoxia tomorrow, and getting to attend a lecture by Lisa Levin from the Scripps Institution of Oceanography at UCSD!
Share on Social Media
twitterfacebookpinterest